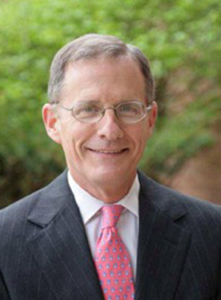 Daniel S. Peters is president of the Lovett & Ruth Peters Foundation in Cincinnati, Ohio.  The foundation focuses on improving the quality of K-12 education nationwide. Dan previously spent 17 years at Procter & Gamble where he held a variety of executive positions in advertising, purchasing and research & development.  Dan is the former chairman of the Philanthropy Roundtable, a national association of grantmakers in Washington, DC, and co-founder of the Alliance for Charitable Reform, a Washington, DC-based organization advocating common-sense reform of the non-profit sector.  He currently serves on the boards of Hillsdale College and the Philanthropy Roundtable.

Dan is a graduate of Phillips Academy in Andover, MA and the University of North Carolina, Chapel Hill where he majored in history.  He has an MBA from Xavier University. Following college, he served with a jet squadron in the US Navy aboard an aircraft carrier. He and his wife, Kellie, have two children.